However, you’ll still need a computer if you want to edit or upload the footage. Many of the latest console games feature stunning graphics and allow you to explore challenging, exciting environments.

When you finally beat a difficult level or land an amazing headshot on another player, you’ll need a capture card to record the footage.

The experience will be even more enjoyable if you can share it with your friends. Modern capture cards are great for capturing gameplay footage, and some products can help you stream and accumulate an extensive library of clips.

What to Look for In a Capture Card

When shopping for these products, you should consider the image quality. You shouldn’t have any trouble finding out what resolution the card uses and deciding if it’s good enough for your needs.

Most modern capture cards will record game footage in 1080p, but there are some products that are only capable of 720p. Another feature to consider is the frames per second, which is also referred to as FPS. With a higher FPS rating, the captured game footage will look smoother, and for the best results, you should consider getting a product that records with 60 FPS.

Many gamers prefer to stream their footage to a YouTube channel or Twitch, and if this is something you’re interested in, you’ll need a capture card that is capable of streaming.

There are even capture cards that give you the ability to engage in live commentary or add a webcam overlay. However, if you need more features, you’ll end up paying more money for the device.

A common mistake that consumers make is overlooking the PC requirements, which can be quite high for some of the latest capture cards.

What most people don’t realize is that HD video requires an enormous amount of computing to handle, and to record, edit and stream your game footage, you’ll need even more computing power. It’s not uncommon for the latest capture cards to require at least an Intel i5 CPU or better.

For live streaming, most devices will require your computer to have an Intel Core i7 CPU, which can be very expensive to buy. Before making a purchase, you should also check the technical specifications and find out what resolutions are support.

The input compatibility is a final feature to check because not all capture cards are compatible with the latest gaming consoles. Below, you’ll find 10 of the top capture cards available, and to save time, choose a product from the list. The Diamond Game Caster HD GC2000 is designed for capturing and editing real-time gameplay, and it allows you to add voice commentary. For convenience, it’s designed as a standalone device, which means it records footage directly to an SD card.

The standalone design eliminates the need to plug this card into a computer, and you can use it to stream directly to Upstream or Twitch. Although this capture card is great for gaming, it’s just as useful for streaming TV programming from your set top box.

Gameplay recording can be initiated with the push of a single button, and you can view and record footage at the same time because the Diamond Game Caster HD GC2000 has an HD HDMI component pass through feature.

This capture card works great for gaming, but you can also use it to convert your VHS movies to DVD, and it comes with a burning, editing and capture application. The AVerMedia Live Gamer is another popular capture card, and it can record your gameplay footage directly to an SD card. It’s compatible with the Wii U, PlayStation or Xbox, and it allows you to capture gameplay in 1080p HD.

The AVerMedia Live Gamer comes with a built-in H.264 hardware encoder, and since it records directly to an SD card, it doesn’t need to be hooked up to a computer. For great results, it uses low-latency streaming and recording, and the TimeShift feature records retroactively.

This product has a stream engine, and it’s compatible with most popular streaming programs. Once it’s connected to your favorite gaming console, it will stream live gameplay footage to Twitch or YouTube, and it even allows you to record live commentary.

This USB capture card works with all of the latest gaming consoles and records footage in 1080p HD. To synchronize your voice commentary and gameplay, it uses a built-in H.264 hardware encoder. 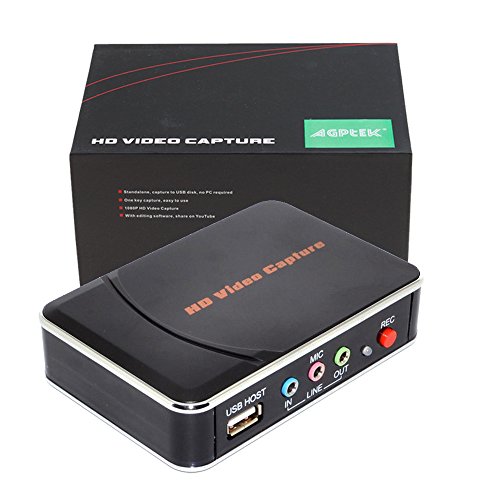 The AGPtek® HD Game Capture is designed for easy recording, and with the push of a button, you can use it to record live gameplay. Like several other products on this list, this capture card records data onto an SD card, which is why it doesn’t require a computer.

The device is easy to use and doesn’t come with a lengthy installation process. To start recording, all you have to do is press the record button, and when you’re finished, you must press the same button.

The AGPtek® HD Game Capture records gameplay footage in 1080p HD, and it allows you to record your favorite games while playing them. For some game consoles, you’ll need to connect an extra HDMI splitter.

Unlike some alternative products, this capture card comes with an extra Mic input and allows you to record your live voice. Unfortunately, it doesn’t support live streaming, and to use this device with a PS4, you’ll need to go into the console settings and enable HDCP.

One of the best capture cards on the market is the Elgato Game Capture HD60, and it’s compatible with all of the latest gaming consoles. This device makes it easy to stream or record gameplay from an Xbox or PlayStation, and unlike some other products, it can record in 1080p at 60 FPS.

Once it’s connected to a Mac or PC, this device is ready for unlimited capture, and it even offers flashback recording, which is great for recording retroactively.

If you enjoy sharing your gameplay footage with others, you can use the Elgato Game Capture HD60 to stream live to YouTube or Twitch. The device is also compatible with other streaming services, and it gives you the option to add overlays.

With a built-in feature for live commentary, you can use this capture card to add live commentary to your footage, and it makes it easy to share your footage to Facebook, Twitter or YouTube. However, if you’re considering this product, you should know that it requires some serious computing power.

The Razer Ripsaw is designed with an emphasis on simplicity, and it’s compatible with all of the newest gaming consoles. It supports a resolution up to 1080p, and for convenience, it also allows you to record with a resolution as low as 480p.

The Razer Ripsaw is made to capture incredible gaming experiences, and it can record gameplay footage in 1080p at 60 FPS. Since it uses USB 3.0, it’s very good at quickly transferring data.

If you have an audience and want to give them the smoothest performance possible, then this capture card is worth considering. For a microphone or music, this device has a second mix-in channel, and it supports almost all gaming consoles. The Roxio Game Capture HD PRO works great with your PC, and it also supports the PS4 and Xbox ONE. With this device connected, you can record gaming footage in HD, and you don’t have to worry about your gameplay getting interrupted.

The Roxio Game Capture HD PRO is compatible with M2TS, AVC and MP4 file formats, and it comes with a new auto-capture feature. You can use this device to edit game videos and add soundtracks, special effects, voiceovers and text.

With a single click, you can upload your videos to popular streaming services, and the Roxio Game Capture HD PRO is great for capturing footage from a PS4 or Xbox One. If you’d like to post game reviews or brag about a gaming experience, then this capture card is worth considering. Once it has been used to record your gameplay, you can transfer and edit the footage with your computer. If you want to upload game reviews or talk about exciting experiences you’ve had with certain games, then this basic capture card should do the trick.

It allows you to add your own webcam or voiceover commentary, and you can share the footage to several popular websites. Some gamers are looking for a basic capture card, and they don’t have enough money for some of the fancier products. This generic UVC capture card is very basic, and it doesn’t require a driver.

It features plug-n-play compatibility with all operating systems, and it’s capable of capturing footage from camcorders, satellite, TV, PlayStation and gaming consoles. With its built-in technology, this device allows you to send video from a USB port to your computer.

This generic capture card offers basic functionality, and if you’re looking for an inexpensive way to record gameplay footage, then it’s a product worth considering. The Elgato Game Capture HD60 Pro makes it easy to record and stream footage from your favorite gaming consoles, and with a maximum recording resolution of 1080p HD, it can capture gameplay in stunning detail. The HD footage is recorded at 60 FPS, which makes every detail smoother.

Like many other capture cards, this product allows you to stream live to popular streaming websites, and for better performance, it uses low-latency technology. The Elgato Game Capture HD60 Pro can even record in 1080p while streaming. 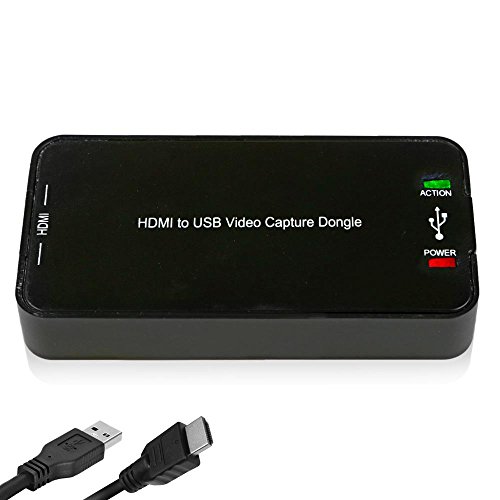 A final product to consider is the Pyle Full HD 1080p external capture card, and it can record gameplay in 1080p HD. This device is ideal for streaming and recording video games, and it sends recorded data directly to your computer.

Since it has an HDMI port, it can record footage from external devices, and it can be set up within minutes. Once your game footage has been recorded, you can post the clips to YouTube or social media. 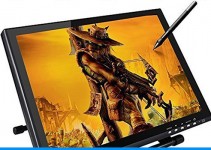 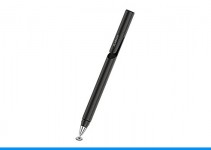 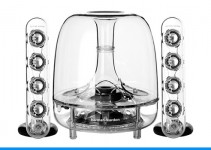