Projector development has come a long way since first being invented more than a century ago. One of the most exciting breakthroughs in projector technology is the invention of the best short throw projector or ultra short throw projector. The term “throw” is an industry word that refers to the distance that the projector has to “throw” an image or video onto the screen. New advances in lenses and lighting sources now allow short throw projectors to be used in smaller spaces, allowing for more convenient presentations and demonstrations in offices, classrooms, and other places where placing a projector may be limited.

Things to Consider When Choosing a Short Throw Projector

Once you’ve figured out that a short throw projector is definitely the right move, it’s important to understand some of the more important technical aspects of these advanced devices.

From a Latin term for “light”, this technical specification refers to the brightness of the projected image. The amount of lumens a projector has is not related to the brightness of the light source but how bright the image on the screen will be. Most projectors have a lumen rating of 3000, so go for a higher number if you plan on doing a lot of presentations in brightly-lit rooms.

It may sound complicated, but the throw ratio is simply taking the width of the projected image or video and dividing it by the distance of the projector from the screen. A small throw ratio means that you’re getting a wider screen image from a projector that is closer to the screen. Top-quality short throw projectors have a throw ratio beginning as low as 0.38 and go up to around 0.5 or so. Many mini projectors are short throw by nature, so that they are adaptable to as many environments and settings as possible.

Essentially, all projectors use one of a handful of technologies to create the light that beams the image onto the screen. The fancy term “digital light processing” (DLP) refers to what is essentially a fancy light bulb. Other technologies include lasers and LEDs (light emitting diodes). Remember that light bulbs eventually will burn out and need replaced while lasers and LEDs are usually rated to last for decades with little or no maintenance.

After carefully combing through user reviews and analyzing all of the most popular models on the market, we have assembled our list of the best short throw projectors available today: 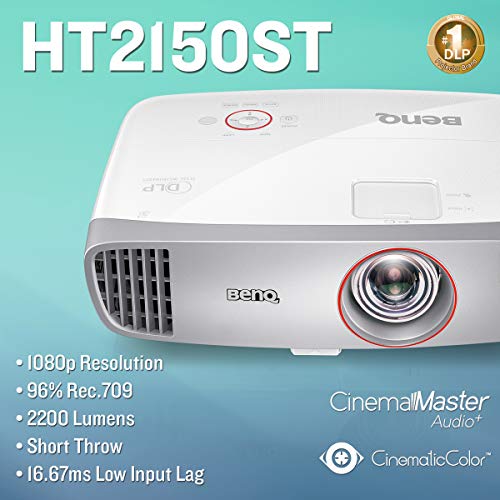 Behold the BenQ HT2150ST 1080p Short Throw Projector. This full HD, 2200 ANSI lumens projector is an absolute marvel. It won the IGN award – Best Projectors For Gaming – for 2020. It’s no surprise then that it’s an amazon choice, with an average customer rating of 4.6 out of 5. The reviews are overwhelmingly positive and with good reason. The color quality, responsiveness, picture quality and contrast of this short throw projector is outstanding. It can project a screen size up to max of 300 inches, or from a distance of 3 feet, a screen size of 100 inches. Perfect for gaming.

Some of the display technology utilized to bring you the incredible image quality, includes a 6x speed RGBRGB color wheel, that brings to life the CinematicColor technology. This brings you the Rec.709 color quality with a coverage of 96%. Rec.709 is the HDTV color standard, and means the shades of colors you see, are exactly the colors you are meant to see. 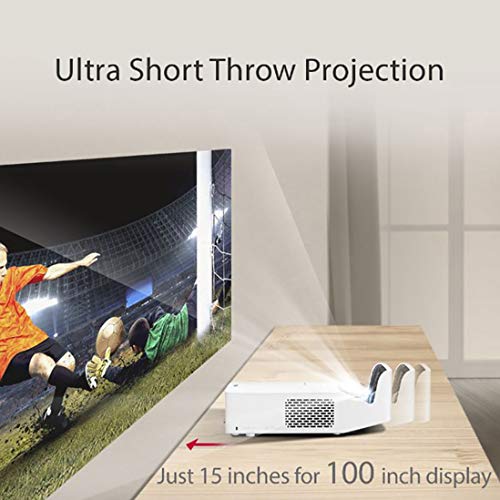 This projector from one of the most recognized names in electronics can deliver a full HD (1920 x 1080 pixels) image up to 100 inches across at up to 1000 lumens from just 15 inches away from the screen. With a number of wireless connection possibilities including DLNA, Miracast, and WiDi, the LG HF65LA ultra short throw projector is perfect for home theaters, presentations, and more. The LG is also smart TV enabled and can work with Netflix, Amazon Prime, Hulu Plus, and other popular services. The LED projetor lamp is rated to last up to 30,000 hours. With a stylish white design, the Optoma GT1080 can deliver a 111-inch wide image from as close as four feet from the screen or up to 166 inches across when placed six feet from the screen. A powerful 2800 Lumens lamp and contrast ratio of 25,000 ensure crisp and clear images every time. The ptoma GT1080 comes with two HDMI connections, one MHL v.1.2 audio out, one 3.5 mm standard headphone jack, and 3D-Sync capability for maximum versatility. 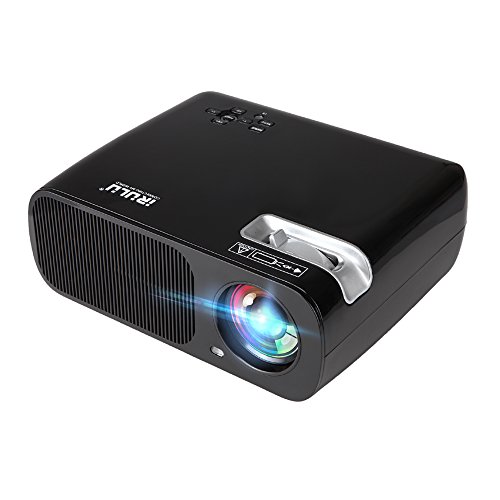 This powerful short throw projector delivers full HD (1080p) images using a powerful 2600 lumens lamp. A convenient five-inch LCD panel gives the operator outstanding control or you can use the included remote. Projected images can be set to an aspect ratio of either 4:3 or 16:9, and the iRulu BL20 comes with two USB, two HDMI, a TV/DTV, AV, YPBPR, VGA, and audio connectors for superior versatility. 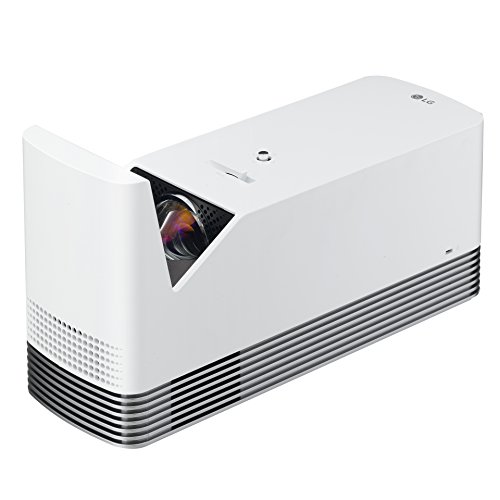 Looking like something out of a sci-fi movie, the LG HF85JA can project images 100 inches across from distances as close as 17 inches from the screen. A convenient Bluetooth connection allows for wireless audio connection with other devices, and the powerful 1500 Lumens lamp delivers a crisp and bright image. The LG HF85JA can also operate as a wireless screen share connection with Android, iOS, and WiDi sources for enhanced versatility. These are just some of the great features this ultra short throw projector from LG brings to the table. It really is a contender. The ViewSonic comes with an innovative design that produces best in class color accuracy and a warm, enhanced two-Watt speaker system producing rich audio for home theater, gaming, and presentation use. The ViewSonic has a powerful 3,200 Lumens lighting system that can produce full WXGA (1280 by 800 pixels) resolution with an incredibly low 0.49 throw ratio. The DynamicEco system reduces power consumption by as much as 70% while the HDMI and VGA ports allow for great connectivity. The only pocket projector to make our list, the S1 from Asus features a 200 Lumen lighting system that can deliver full 1080p images from ultra close distances. The S1 can project images up to 100 inches across in a device that weighs less than a pound and is small enough to fit in your pocket. The S1 comes with full HDMI and MHL ports for connectivity as well as a USB port for charging third-party devices. From one of the industrial leaders in smart peripherals, the VS240 from Epson features a powerful 3000 Lumens DLP lighting system. With SVGA resolution (800 by 600 pixels) and a special three-chip image technology, you’ll always get clear, crisp images with the VS240. The VS240 supports HDMI for video and audio connections, and is easy to set up and get running with the included remote control. Another outstanding model from Optoma, the GT750ST can project a 50-inch image onto a screen from just 32 inches away. The built-in media player is ideal for showing still images, video, or even playing music while the multimedia compatibility allows the GT750ST to be used with Android, iOS, and Windows devices. Compact enough to fit in your hand and weighing less than one pound, the GT750ST comes with a 700 Lumens LED lighting system for home theater, gaming, and presentation use. 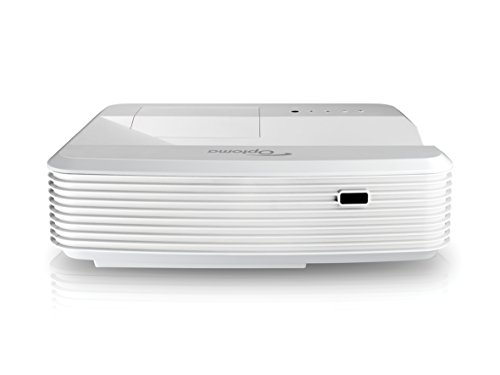 The Optoma GT5500+ is a sleek ultra short throw projector that can deliver images up to 100 inches in size from as little as 13 inches away from a screen or wall. The GT5500+ provides a 1080p resolution, with 25000:1 contrast ratio. The brightness tops out at 3500 lumens and there is a 3D sync port which allows you to use Active 3D glasses. That is great for gaming and great for 3D films. The Optoma GT5500+ also comes with extensive connectivity options including 2 HDMI connections, VGA, dual audio in and many more.

The Benefits of Using a Short Throw Projector

The name might sound a little weird coming off of the tongue, but once you see the benefits of a short throw projector, you’ll wonder why this technology hadn’t been invented decades ago. The short throw projectors are great for setting up presentations and movies in even the most intimate spaces while still being powerful enough to use in larger spaces.

Here are some additional benefits to choosing a short throw projector:

Avoid the Duck and Cover

Being closer to the projector means you’ll never have to worry about fuzzy, distorted images on the screen. Old-fashioned projectors often seem to be either too close or too far away to get the image looking sharp and in focus on the screen, but a short throw projector never has that problem. All of your images and video will be ultra-crisp and looking great with a short throw projector.

Anyone who has given a lot of presentations with old-fashioned projectors knows that there’s nothing worse than making the mistake of accidentally looking right into the eye of the projector. In a split second, you get blinded by the light, and then have to spend the next few minutes trying not to crash into furniture as you continue your presentation. With short throw projectors, you’ll never have to worry about accidentally coming in between the machine and the screen.

Before choosing the right short throw projector, it’s important to assess the conditions and likely usage scenarios for the projector. If you plan on transporting the projector to multiple locations, be sure to pick a compact model that can be quickly closed and packed away for further use. If you intend on using the projector in small or more intimate spaces, choose a model with a lower throw ratio to ensure you get the best quality image possible. Carefully assess all of the technical features, including the brightness of the projected image, before choosing the right short throw projection for your needs.

Other names to look out for that didn’t make it on the list for now, include Benq and Sony. Both Benq and Sony do make remarkable short throw projectors too, but from those we have reviewed, they didn’t quite hit the top 10. 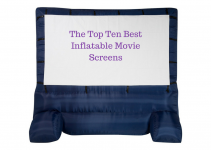 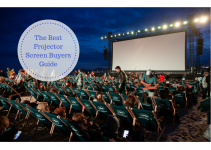 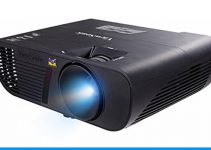